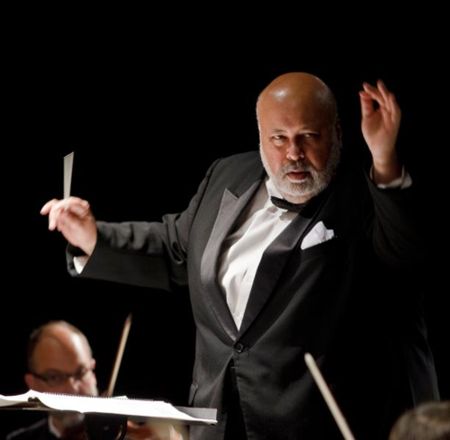 Our speaker this February 23, William Henry Curry, had relatively little music in his Pittsburgh home when young … until the family got a record player. Then, at age 10, Curry began conducting in front of it with the baton that came with it. He began playing music in the sixth grade, and he actually began conducting and composing at the age of 14.

After graduating from Oberlin, his first job was viola player with the Richmond Chamber Orchestra. In his first year there — on just 10 hours’ notice — he was called on to conduct the orchestra, chorus, and soloists in Beethoven’s massive Ninth Symphony.

After serving as a conductor for the Baltimore Symphony and then the St. Paul Chamber Orchestra, he was associate conductor for the Indianapolis Symphony when, in 1988, he became that year’s winner of the Leopold Stokowski Conducting Competition (an annual prize for conductors under the age of 35), which included a conducting appearance with the American Symphony Orchestra in Carnegie Hall.

Maestro Curry came to the NC Symphony in 1996 from the New Orleans Symphony. While here, he led the orchestra’s first performances of several symphonies of Sibelius, Bruckner, Liszt, and Tchaikovsky, and he also had the honor of conducting some of his own compositions. He retired in 2016 after 20 years with the NC Symphony, partly to concentrate on his job as Music Director of the Durham Symphony Orchestra (he took that position in 2009) and to have more time for composing.

When he was only 14 years old, Curry’s music teacher handed him a small wooden baton and said, “I think you’d make a good conductor.” In the more than four decades since, he has led more than 50 orchestras in the U.S. and overseas, as well as a few stints conducting opera and ballet. The results are profound.